12 days to go until the 'Who Do You Think They Are?' exhibition opens at The Forum in Norwich (details are here - it's on from 13th March to 1st April) and I've just got the banners signed off to go to the printers. Having to make something eye-catching that is tall & thin when the Group Photograph is short & wide presented an interesting problem, and in the end I decided to take a slice and present two views of it which alluded to the multidimensional nature of what I’ve been trying to do - going from monochrome soldiers into human beings in all their complexity. Here's what I came up with and I think they're going to look great when they're printed 2 metres tall (and you'll be able to see the details in the photomontages): 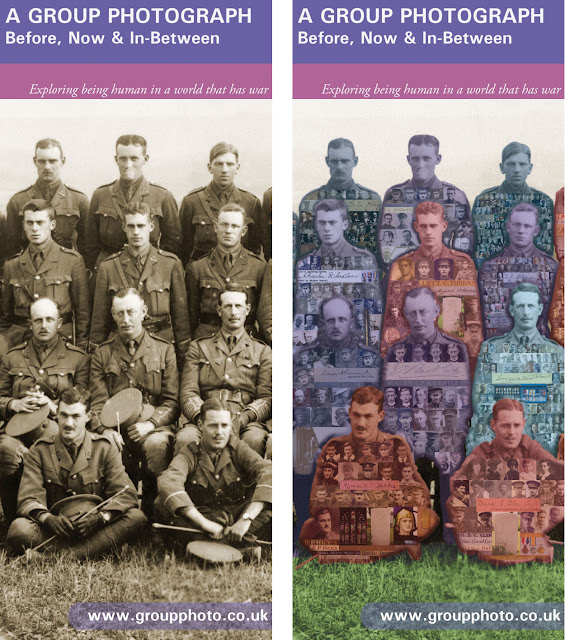 I've also made good progress with my animated photomontage. In the end I bit the bullet and upgraded to a less recalcitrant version of my video editing software - and the result was a vast increase in speed and quality, and less swearing (there will always be swearing with computers - as one problem gets fixed, others pop up completely unanticipated - I just have to keep reminding myself that it's amazing any of it works at all). Here is a still from the film in the early days before the War:

Imagine that being project at over 2 metres high and being able to see those who grow old alongside those who grew not old. I did a projection test a couple of weeks ago - I imagine those watching it with me must have been rather concerned as to what they were going to say if it didn't work for them after my spending 8 months working on it. I'm happy to report that the response was that it's likely to have a huge impact on visitors. Relief all round. I've still got some finishing touches to make, and I'm also putting together displays for a couple of touchscreens, including one where you can touch each man in the group photograph and see some details for each of them (and rather than just replicate the book, I've chosen other pictures that show different aspects of the men's stories).

There are also a couple of presentations coming up:


Just to say that I am not going to be with the exhibition all the time it is on, but If anyone's planning to make a special trip to Norwich and would like to meet up with me, please get in touch. Currently I'm aiming to be there on Saturday 18th & Sunday 19th March, and then on the Monday for my presentation in the evening. I'm looking forward to getting all this work done and starting to have some kind of social life again!

Finally, my plan to get onto Only Connect has stumbled for now. I applied as an individual and was introduced to my new team-mates five days before the audition. Despite getting on really well together and surpassing our expectations at the audition we were told last week that we haven't made it on for the next series. The door was left ajar, though, as we were encouraged to apply again next year - and by that time we will have had the opportunity to do some serious training and get to know each other properly. And if that comes off, it'll be going on in the run-up to the full-scale version of my exhibition at The Forum in November 2018...