A new book - and there is some very good news

For the past two years I have been absorbed in researching, writing and laying out a new book. It has been another typical Andrew Tatham project where I've started out with what is on the face of it a simple idea and it has morphed into something that has required an enormous amount of legwork and taken over my life. The simple idea was to present a book of the letters of Charles Bartlett, my great-grandfather's second-in-command from the Group Photograph. Charles Bartlett is a larger-than-life and rather roguish character and the letters are almost completely uncensored and full of incident described with directness and bluff humour. I'd had the idea of making a book from them almost from first sight nearly 20 years ago but it had had to be on the back burner as I focused on what I was doing with the Group Photograph as a whole in the lead up to the exhibition in Ypres. When I turned my attention back to the letters, I thought it would be interesting to see what I could find out about the people he mentions in them, that that would give more of a feel for the wider landscape in which his life was being lived. The thing is that he mentions some 300 people in the letters, but never one to be daunted by idiotic challenges, I set up a spreadsheet and off I set.

What could have been a chore turned into a constantly surprising voyage of discovery into the past. Charles Bartlett had worked as a private secretary in the Theatre before the war and his wife was an actress and singer on the West End stage. Names in the letters that at first sight meant nothing to me turned out to be some of the biggest names in Edwardian Theatre with larger than life stories to match. Being in the war-time Army brought him into contact with all sorts of people from many walks of life who he would otherwise never have met, and being a senior officer meant that that included a full spectrum from private soldiers up to generals. As with my first book, I wanted to turn the names into human beings and kept digging until I found something that evoked some kind of uniqueness in the lives being led. And the stories that kept popping up were incredible, with people who were noted for their heroism or eccentricity or insubordination or complicated love lives (or combinations of all of these), to men avoiding conscription, to spies, royalty and a newspaper magnate. Through it all, I wanted to give voice to the variety of war experiences and show how families dealt with their losses and what the survivors did with the rest of their lives.

When it came time to start writing and laying out the book, I decided I wanted to make it visual to give an atmosphere of the times and places and people of the letters. Key to that was using scans of the originals with their handwriting and the feel of the writing papers with all their different colours and textures and shapes. Still, I wanted it easily readable so after experimenting with ways to overlay the letter transcriptions and combine them with the visuals and the notes about the content, this is what I came up with: 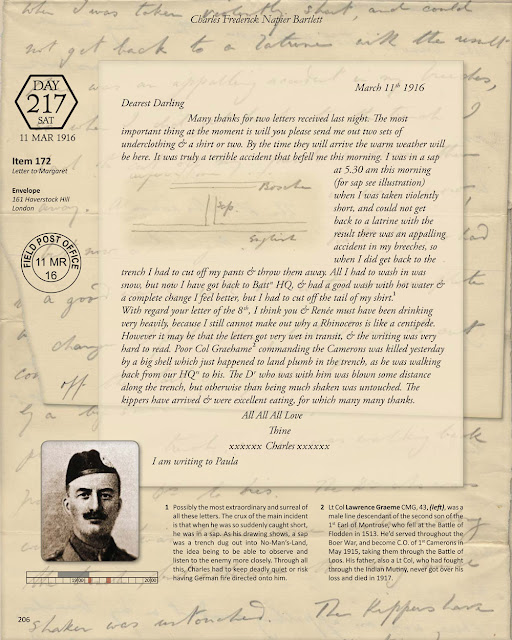 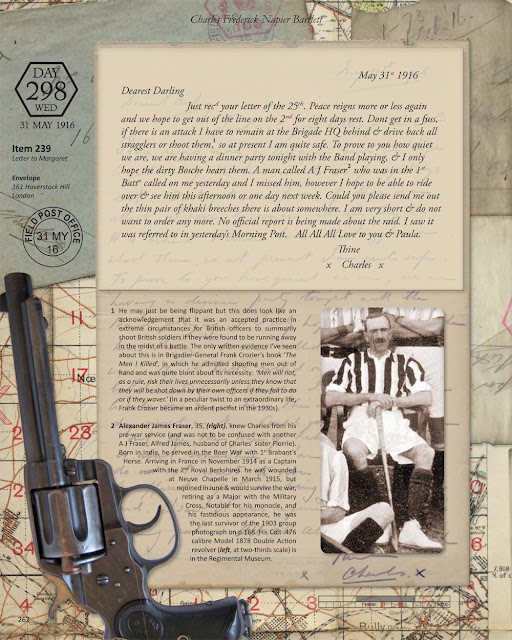 Believe me, doing that for a whole book with over 300 letters was not a small task. It took me months. In the end, though, I felt the effort had been worth it. Of course that meant nothing if it didn't speak to anyone else and it was with some trepidation that I sent it out to my first readers. My first first reader was my friend Patrick Miles (author of 'George Calderon - Edwardian Genius'). His response was beyond enthusiastic and can be measured by the fact that he asked me to confirm that he was indeed the book’s first reader because he thought his descendants would be proud as he was sure it would become a classic. I am so lucky to have had that to hold on to as I face the hurdles towards publication.

With the feedback from my first readers showing that I was on the right track, I then did some editing as well as cleaning up  the visuals (painstakingly cutting out the edges of the letters from the scans took three months on its own). In the background whilst I was doing all that, I was also looking at how I could get my book to stand out so that it might have a chance to catch the eye of publishers and prospective readers. Interesting content is not enough, particularly if neither the subject nor the author is a household name - and on the face of it a collection of First World War letters might not seem of more than niche interest. How could I show there was more to it? I'd seen other books with esteemed people writing the Forewords so I set to finding my Esteemed Person.

William Boyd had chosen my first book as one of his Best Books of 2016 in The Guardian and I thought he would be the perfect person because his novels are full of acutely observed human beings with all their foibles, and his attention to detail in his historical research is matchless. It is also obvious that he has a keen interest in the First World War given that he wrote and directed ‘The Trench’, starring Daniel Craig. To my absolute delight he agreed to write the Foreword. He was involved with the end game of his latest novel as well as TV and theatre projects, so he couldn't address this immediately but I'm looking forward to seeing what he writes about Charles Bartlett and his letters.

I then sent my book out to a few other Esteemed Persons in the hope that they would give me some useful feedback. Some got back to me to say that they didn't have time to read more than the few pages I'd printed out for them (I knew it was a big ask to expect them to read the PDF of the whole thing from a memory stick) but still, even in their busyness, they took the time to say some really helpful and encouraging things. Three who did read it have given me a huge leg-up.

Professor Ian Beckett had helped me out with some research questions I'd had with this book and not only did he read the whole thing and point out what he thought was of particular value and interest but he gave me a an confidence-boostingly small list of minor corrections to make. It will mean a lot when approaching publishers to be able to say that someone so eminent has effectively peer-reviewed the military and general history of the content.

Helen Tovey, editor of Family Tree magazine, responded with great enthusiasm, saying that the letters made 'compelling reading' and that even though she had no connection to Charles Bartlett she found his story 'absolutely intriguing' on a human interest level, and as an example that 'all our lives are more complex and nuanced than they might seem at first glance'. It is that sort of idea that is at the heart of what I do, that by looking at the specifics of other people's lives we can see universal ideas that we can apply to ourselves.

I wrote to Sir Michael Morpurgo more in hope than expectation and was beyond thrilled when I returned home from a trip away to find a postcard from him on my doormat, thanking me for sending him the book and saying that I could use his words when contacting publishers - and his words were 'moving, powerful, important'. If that doesn't catch a publisher's eye, I don't know what will. And even if it doesn't, it's going to open up all sorts of possibilities when self-publishing.

The First World War Centenary may be over but it seems that reminders are still needed of where prejudice and aggressive rhetoric can lead. Maybe my book won’t change the world, but I’d like it to have a chance to do its bit. I hope it won't be too long before you see a book which might look something like this: 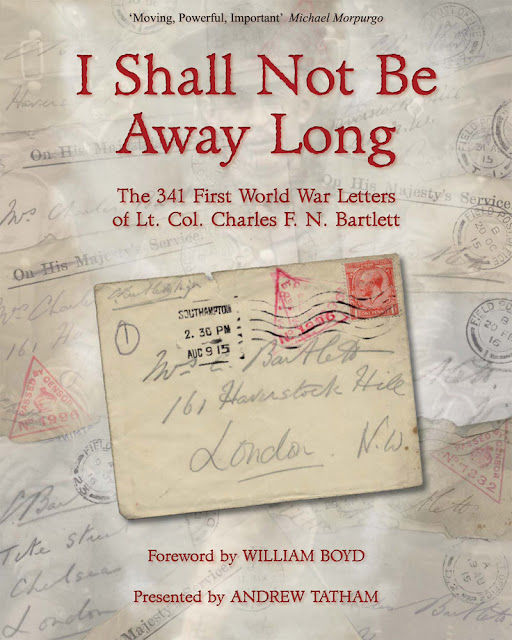