The reprint and the advent of a Sunday Times review

Things have been a bit fraught of late but I am doing my best to ‘Never Ever Give Up’ and even in amongst life’s difficulties there have been some shining lights to lead me on. In this post I’m going to try to concentrate on the shining lights but, as ever with life, you need to have the darkness for the lights to be seen at their brightest so I’m going to try to give an idea of it all without doing too much darkness dwelling.

So, at the end of my last post I was contemplating ordering a reprint. I had people urging caution and people urging confidence and high in my mind was the memory of the last reprint of my first book which was followed by sales falling of the edge of a cliff and my having to pay storage on those books ever since. Past experience can never exactly mirror the future and the cliff fall happened after the 3rd reprint whereas here I am right at the beginning with this book, so thinking that I would never forgive myself if I ran out of books in the run-up to Christmas and with big publicity still possibly to come, I ordered the reprint.

The day after ordering the reprint was eerily quiet on the sales front. I wouldn’t have been human if I hadn’t got the jitters but then there was a flurry of sales and that has mostly continued with my stock going down from 915 books when I ordered the reprint on 18th November to 254 today. Thankfully the team at my printers, Healeys, have been doing a fantastically efficient job of dispatching the orders from the mailing lists that I send them and have also delivered on their promise to have the reprint ready for dispatch on Monday 14th December. That has been absolutely key for me because I am the only customer support operative for my entire publishing empire and if anything major had gone wrong then I would be up to my neck in it.

I have had to field a few customer service issues, from sorting out accidental online purchases, to delays in the post, to one book arriving looking like it had been hit with a sledgehammer, to others that have been soaked through by the rain. Luckily the numbers have been small compared to the total sent out and while even that is frustrating, in some cases it has led to nice exchanges including with one customer who ended up leaving a lovely review on Amazon.

I was very glad of that review because the first reviewer to post on Amazon about this book that has taken me 3 years and untold effort to produce couldn’t stop himself from using 7 of the 13 words of his review to bemoan its delayed arrival in the post. This was soon followed by another review that really irked me not just because of what he said but also because he’d used less words to review my book than he had for other items he’d bought like a portable shower for dogs, some fast grab wood adhesive and a puncture-proof wheelbarrow wheel. Each to their own, but given that they were at the top of the list of reviews for a few days because they were verified purchasers from Amazon, I was concerned about how they might be affecting potential readers. Thankfully with a bit of time they have been diluted by other reviews. I had hoped for a few more by now but I hadn’t counted on the phenomenon that is Christmas. A lot of the books that I have sent out have arrived, been treated to a brief inspection, and then wrapped and hidden. The most extreme example of this was as a result of my sending a free copy to someone who gave me a great deal of help with this book and he told me that on its arrival his wife had kidnapped it and he didn’t expect to see it until after the Queen’s Speech on 25th December – and she hadn’t even bought it! Maybe she thought Santa was dementing and had sent things too early so she had to step in. Whatever, it’s going to be interesting to see what sort of response there is after hundreds of copies of this book get opened on Christmas Day.

I’ve been very glad to receive lovely messages from those who have got straight into their reading and finished the whole book. After all this effort, it really does make such a difference to hear directly what the impact has been both on people who don’t normally read a lot about the First World War and also from those whose knowledge of that time is deep and wide-ranging. I’ve given a glimpse of some of the responses on www.ishallnotbeawaylong.co.uk including this one that gave me a real chuckle: ‘Even as I type my husband had disappeared into the loo clutching the book - I may never see him again!’

I was also thrilled to receive a letter from Melvyn Bragg with the words, 'It's a wonderful tribute and personalisation of a great historical event. It has all the marks of a true labour of love and a love of essential detail. I'm sure it will be treasured by all who read it.’ He really is the most wonderfully kind and thoughtful man. To think of all the calls there must be on his time and I’d only posted the book to him two weeks before.

It is these sorts of responses that have kept me going, particularly recently as I have been having wrangles with Amazon. When things are going well with Amazon, then it’s relatively plain sailing but if ever anything goes wrong, one can quickly get plunged into a Kafkaesque nightmare. There is no way of speaking to anyone so that you can listen to each other and have a true back-and-forth. It all has to be done by their support messaging system and it is obvious that their support staff have such high targets for messages they need to answer per hour that they don’t give anything more than a cursory glance and then cut and paste ‘an answer’ rather than ‘the answer’. I queried why it was that my book was at No 6 on the Bestseller List for World War I biographies when none of the top 5 were World War I biographies (unless David Attenborough’s autobiography documented his forays into time travel, and a businessman investigating a journalist’s murder in modern Russia had found that Mr Putin was blaming Rasputin). Really a minor issue, but I thought Amazon would quite like their book lists to actually mean something. Maybe I should have let it go but I don’t respond well to not being listened to, particularly when I’m trying to be helpful! Eventually someone said that they would pass it to some internal team to investigate but not until after much socially distanced swearing emanating from this particular Norfolk cottage.

More serious has been the appearance of a ‘Temporarily out of stock’ message on the listing for ‘I Shall Be Away Long’. My offer on marketplace is still there but a lot of people don’t understand how Amazon works in terms of what is in their warehouses and what is being provided by marketplace sellers – they’ll see ‘out of stock’ and not look further. As a result there’s been a huge dip in sales and all attempts to get a resolution are being met by the definition of obtuseness. This would be significant at any time but in the run-up to Christmas when the vast majority of book sales happen it is disastrous. And on top of that, it is taking the shine off what should be enormously good news. The week before last I was told that the lead reviewer of the Sunday Times loves my book, that his review is going in on 13th December (i.e. tomorrow) and that it even might be the front of the Book reviews in the Sunday Times’s Culture section. John Carey is an emeritus professor of English Literature at Oxford University and given what he wrote to me about my first book I have high hopes that his review will be more than favourable, and beautifully written too. It seems unlikely that this mess with Amazon will be sorted out by tomorrow, but I’m trying to hold onto the idea that the accolade of a good review in the Sunday Times doesn’t happen to many and will set things up for the long term prospects of this book whatever immediate elephant traps there may be.

There have been so many other things to talk about from the 4 weeks since my last post, but I’m going to leave it there except for a few final notices:

Finally, on a lighter note, I received a very kind email from a baker in Lyme Regis, offering to send me some of her wares with the note ‘I am sure publishers need such sustenance!’. I went onto her website at www.leakersbakery.co.uk and immediately zoomed in on the Jurassic Foot Crunchy Date Loaf, baked in the shape of a dinosaur’s foot, which I chose as it reminded me of holidays looking for fossils on the beach down there. Soon a parcel arrived full of goodies with one special addition being this gingerbread Triceratops: 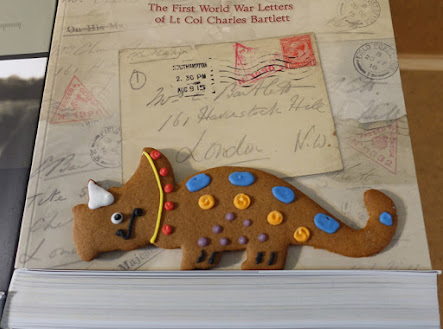 A timely reminder that in amongst all of the ups and downs of life, little acts of kindness can make the world of difference.