With Jeremy Vine at the Appledore Book Festival

Having only previously spoken to Jeremy Vine whilst he was interviewing me on Radio 2 in December and January it was a great pleasure to finally meet him at the Appledore Book Festival last weekend. He's a patron of the Festival and it was through his suggestion that I was booked to appear - and I was lucky to spend a lot of time with him over the weekend as we also met up with our mutual friend Helen who had brought my book to his attention in the first place. Although they'd stayed in touch, they hadn't seen each other for over 30 years and there was some hilarity as, when he first saw me, he was interviewing an author on the stage at the same time as trying to work out if the white-haired woman sitting next to me was really Helen - only later in the pub discovering that Helen hadn't arrived before the event and actually she is still flame-haired and remarkably youthful-looking considering she has teenaged children.

When you spend time with Jeremy you can see why he is so successful. He is genuine and interested in people and the world around him, and is always thinking and noting down ideas to follow up later. I also saw at first hand how he is adored by his Radio 2 audience, with people coming up and offering to buy him a drink, inviting him to a housewarming party, and asking to have selfies with him. He took it all in his stride, even when the selfie-taking was an extended palaver because the selfie-taker was of a generation where they weren't entirely in control of their smartphone. Luckily I had my own personal photographer (Helen) so I didn't have to embarrass myself trying to get my personal technology to work: 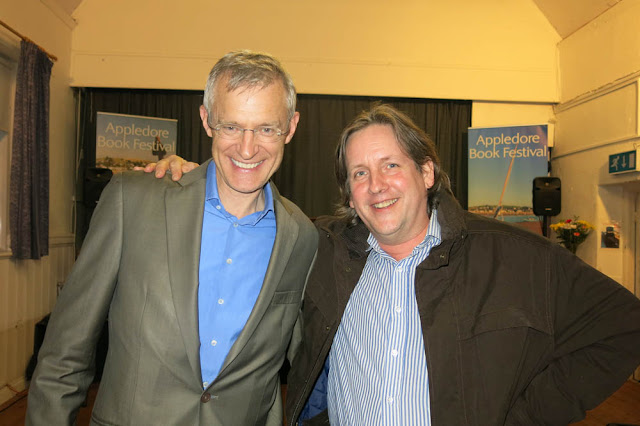 Another thing with Jeremy is that he knows that his celebrity enables him to do things for good. He wasn't being paid to be at the Festival but he was fully committed to it, wanting to help in any way he could, preparing professionally for the interviews he was hosting, and doing what he can for a small village book festival that is punching well above its weight, with 78 events including some very big names, some of whom came because of his patronage.

Appledore is a friendly place and I can recommend a visit at any time of year, but particularly when the Festival is on - keep an eye out on www.appledorebookfestival.co.uk for details of next year's Festival. I would also recommend The Seagate as a place to stay, eat & drink - they really looked after me, and it was a real treat to find somewhere that bent over backwards to accommodate my various food difficulties.

My event was sold out and chats with various friendly folk beforehand (including one who had come all the way down from Warwickshire to hear me speak) meant that I was nicely relaxed and gave one of my best shows - and was rewarded with a lot of interesting questions afterwards and Jeremy saying it was one of his highlights of the Festival. Now, onwards to shows in Herne Bay and Newbury this week - see www.groupphoto.co.uk/presentations.