An anniversary, and a comfort to the sick

Today is the second anniversary of my first chat with Jeremy Vine on the radio. The funny thing is, though, that I have only just recently realised that today is also a very significant anniversary within the story of my project. When I was speaking on the radio about the marriage of Will Bissley to his childhood sweetheart Mu, I was unaware that it was 100 years almost to the hour that their wedding took place. It's amazing that the wedding ever took place. Mu was born in Shrewsbury, 120 miles away, and only moved down to Will's home town of Maidenhead when she was nine, after the death of her father. Even when she joined the church choir and her eyes met Will's the path of true love was not clear. They were of different social backgrounds (her father had been a vicar and his father was a local builder and developer) and in those class-bound times, they were not allowed to talk to each other. They got round this by exchanging little notes via his cassock pocket hanging up in the vestry, and by whispered conversations through her garden fence - and eventually by the time of the War things had developed so that they were able to get married. I have told the story many times of their brief marriage and the miraculous growth of their family in his absence after the Battle of the Somme, but on their anniversary today I think it is worth remembering the possibilities of life as shown by their family tree (see description below): 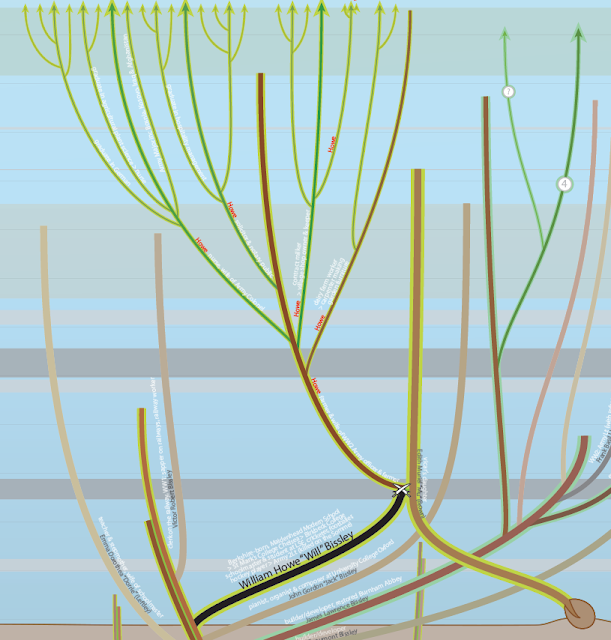 After Will was killed, you can see his daughter growing to the left and then all the shoots of new generations growing above - 26 lives that couldn't have existed but for their chance meeting.

Our lives are changed by the people we meet along the way and some of those meetings only show their true significance long after they occur. In 2006 I took part in Norfolk Open Studios. I remember being frustrated by the small number of visitors who came but in the long term I have grown to realise that it's not how many but who it is that counts. Patrick & Alison Miles were up in Norfolk on holiday and I'll never forget Patrick's reaction as he emerged into the light from my shed cinema having watched my animated film based on the Group Photograph. He was clearly moved and fully engaged with what I had done, and that initial enthusiasm carried over into us staying in touch over the years. He wrote a lovely review of my book on his blog early last year, and since that time we've been geeing each other along through our attempts to navigate the publishing world. And then out of the blue I got an email saying that he and Alison had decided to give my book as presents this Christmas and could I organise a bulk order. I'm not giving anything away to any of his family and friends as Patrick has already let the cat out of the bag on his own blog where he has given full expression to his enthusiasm: www.patrickmileswriter.co.uk/calderonia/. So many people seem to live their lives without the curiosity and enthusiasm for the new that is Patrick's trademark, and I am glad that he found me. (And if you would like to make your own bulk order, a box of 10 signed books is £180 including delivery, a saving of £38 on ordering individually - send me an email on andrew@groupphoto.co.uk and we'll sort out the arrangements).

None of what I've written so far explains the "a comfort to the sick" part of the title of this post. Well, last week I had a text from a friend saying that her son (who is 13 years old) was home from school with a sickness bug and was asking for water and a copy of my book (!). Unfortunately she'd loaned out her copy and could she buy another one for him, and when could I bring it round? Of course I dropped everything and drove round (what author wouldn't?) and was even more touched when she told me that he insisted on not seeing me as he didn't want to pass on any bugs to me. I don't know how significant my book was in his recovery, but everything about this episode in our lives made me feel better.

I'm currently playing the long game. All these books I had printed up are selling at a trickle but I am fully absorbed in researching and writing my next two books and, if I do it right, those two books will lead people back to my first book. I am given confidence by the amazing stories my research is uncovering and the love that people still show for my first book.
Posted by Andrew Tatham at 15:32